There have been several variations of Blues Scales used over the years. Most commonly, the Blues Scale refers to the 6 note scale derived by adding a #4 / b5 note to the Pentatonic Scale. This note is sometimes referred to as a Blue note because it gives the Blues it’s distinct sound. 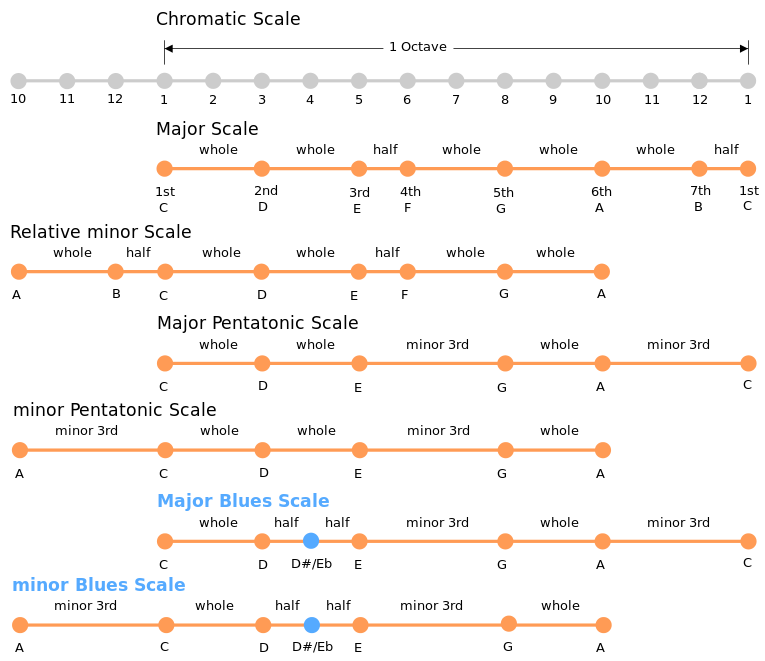 Here is the C Major / Am Blues Scale.

It is a movable pattern, just like the bar chords are movable.

You should identify each “Box” by where the root note lies within the pattern. Practice each pattern until you have it down, maybe for a whole day, or a whole week before moving to the next.

Here is the next “Box” shown for the C Major or Am Blues Scale. Notice it is adjacent to the previous pattern at the 5th fret.

Here’s the next pattern, shown for the C Major or Am Blues Scale.

Since the Blues Scale is a 6 note scale, there are technically 6 places on the 6th string to start a “Box” pattern, but it probably doesn’t add much to define a box between two Pentatonic Scale boxes.

Again, don’t rush through these patterns. They take time to sink in.

Here is the next pattern for the C Major or Am Blues Scale, adjacent to the previous pattern at the 12th fret.

While the 5 box patterns are an effective tool for learning the Blues Scale and getting it under your fingers. Start moving between adjacent boxes.

Can you identify the root note in each box?

Now it is important to start breaking the box boundaries. Adding a few notes from adjacent boxes builds fluidity and is the next step in “seeing” the Blues Scale pattern across the entire fretboard at once. For example, here is the first box we learned above with some notes added from the adjacent boxes on either side.

Apply this to all the box patterns eventually extending the patterns to cover 3 full octaves, starting from any box, at a moment’s notice. You may find it helpful to chart them out on fretboard paper so you can plan your practicing.