Musical notation is a way to save your musical ideas on paper, to preserve and share your ideas with others.

Note Pitch on the Staff

High notes are written on a 5 line staff with a Treble Clef sign at the beginning.

Low notes are written on a 5 line staff with a Bass Clef sign at the beginning. 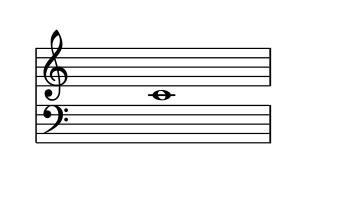 although they are typically shown spaced farther apart. 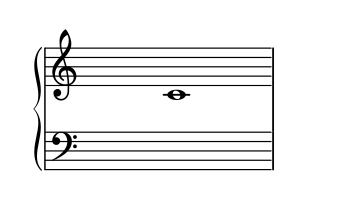 notes above or below the staff are written on ledger lines 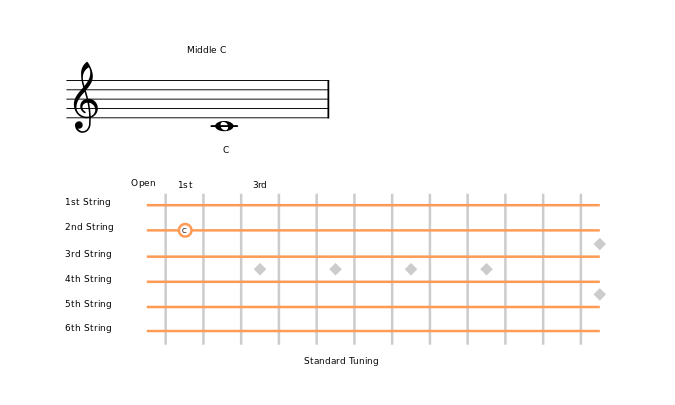 Music notation for Guitar is often transposed down an octave and indicated by a little 8 under the treble clef sign. 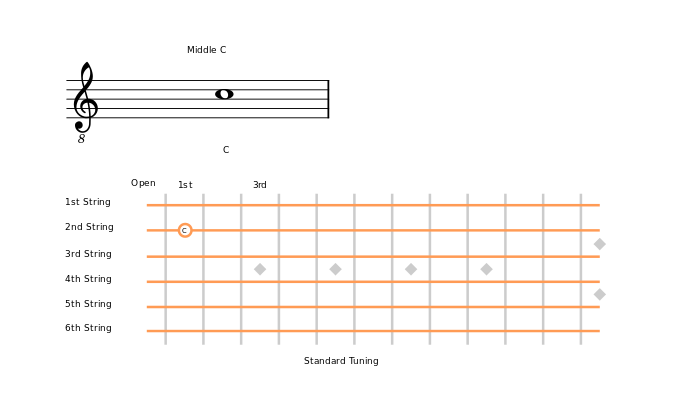 The lines and spaces of any staff are the natural notes, A B C D E F G.

It really could not be more simple, but does take some practice to commit it to memory and to be able to read it at full speed. If you go through the First Position Notes lesson, you’ll have it down in 7 days and will never be intimidated by music again!

As I said, music notation is simply a way to save musical ideas on paper. Now, If you were going to invent a system for notating musical ideas, you are eventually going to have to account for every nuance. We don’t want to get overwhelmed, but we should at least cover

Any sharps or flats are marked, either

An accidental applies until the next bar line.

A key signature applies to all the notes that follow it, unless the note is marked as an accidental. Here, all the F, C and G notes are played sharp by default. The natural sign is used to indicate that this G should not be played sharp.

Certain notes are enharmonic, meaning they have two different names for the same note.

Then, because B and C are only a half step apart to begin with,

Similarly, because E and F are only a half step apart to begin with,

There are various other markings, indicating the rhythm pattern. When you tap your foot, each tap is 1 beat, indicated by a quarter note, which is filled in and has a stem, pointing either up or down. It doesn’t matter whether they point up or down. The direction is used to improve aesthetics and readability. If two parts are written on the same staff, the stem direction can be used to help identify each part, but it doesn’t change the pitch or duration of each note.

The vertical lines between groups of notes are called bar lines into measures. Each measure has a set number of beats. The number of beats is indicated at the beginning of the line in a fraction called a Time Signature. Here we have a 4/4 time signature. The top 4 indicating that there are 4 beats to a measure, and the bottom 4 indicating that the quarter note gets 1 beat. An 8 in the bottom number would indicate that the eighth note get one beat.

This same pattern could be written in another time signature such as 2/4, with 2 beats to a measure and the quarter note getting 1 beat.

Here is a slightly different pattern written in 2/4 time, showing how each measure gets 2 beats, no matter what types of notes fill the measure.

Since there are only two beats to a measure in 2/4 time, a whole note could not be used. Instead two half notes are bridged together with a tie to show that they are connected and played as one long note.

The choice of time signatures follows the natural grouping, repetition or feel of the rhythm, making it easier to write, and easier to read.

Shorter notes can be shown by adding flags to the stems. A quarter note is a solid note with a stem and no flag, while an eighth note, which last half as long as a quarter note, gets a flag. Every time we divide the duration by 2, we add a flag, so a sixteenth note gets 2 flags, while a thirty second note gets 3 flags.

Usually adjacent flags are tied together into beams to make it easier to read.

A note with a dot after it, lasts 1.5 times the length of the original note.

A note with a “Fermata” over it lasts longer than it’s expected value, as indicated by a visual signal from the band leader or conductor. Usually found on the last note of a phrase or the last note of a song, such as when the singer really holds onto a note.

It may sound complicated, but it really isn’t complicated at all. You will quickly get use to it if you start with easy pieces and master them before moving on.

There are also eight note rest, sixteenth note rests, and thirtysecond note rests, which are indicated by adding flags, just like with their note counterparts. 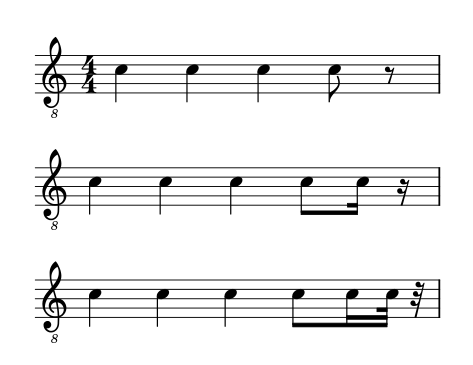 There are even more rhythms that do not fit the mold. One is triplets, which are played 3 notes in the span of two beats.

And another is swing music, where the beats are not evenly spaced, but rather have a swing feel to them. That will be indicated by the word swing on the page.

The speed of the beats, or tempo is indicated with either an Italian word or more simply a quarter note equals the number of beats per minute above the staff.

Some of the Italian tempo words include:

Sections of music are often repeated, and the repeat sign says to go back to the nearest repeat indicator, or to the beginning if there isn’t one. In this piece, you play bars one and two, then the repeat sign at the end of bar two tells you to repeat those first two bars.

A repeat can go back to the beginning via. the D.C. marking

Or, it can go back to the “Segno” sign via the D.S. marking.

So for example, this D.C. al Fine would

and this D.S. al Coda would

This should be enough to get you started reading most popular music. Classical music uses many more markings. If you run into something you don’t understand, Google, Wikipedia, or a good book on Music Theory will be helpful. For example: Wikipedia has a list of virtually every marking at

Comments?  Join the discussion about reading music and let us know your thoughts.

Join the discussion about this poll and let us know why.