Musical notation is a way to save your musical ideas on paper, to preserve and share your ideas with others.

So far, we’ve been using standard notation, which has it’s strengths and limitations for guitar. One of the limitations of standard notation is that there is no good way to notate where to play a particular note on the guitar. For example, a C on the 2nd string 1st fret can also be played:

They are all the same note pitch, although their sonic character or Timbre does change because the strings are different thicknesses.

“Tablature” (TAB) is another way to notate guitar parts. In Tablature notation, there are 6 lines representing the 6 strings on the guitar, and a number on each line indicates that string is played at that fret. For example,

As you can see, this method of notation is missing a lot of information about how a piece is to be played. Often TAB notation will be a written with it’s standard notation above it, which includes the usual timing information etc. 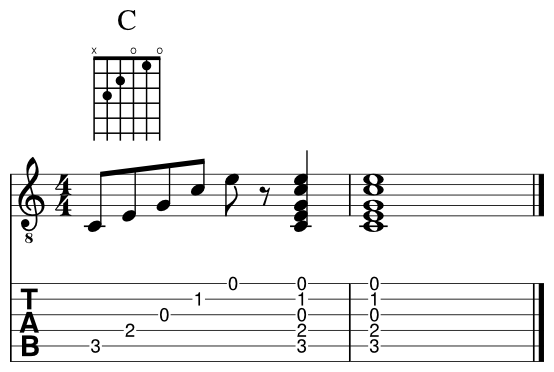 You will likely see a lot of variations of TAB. One common variant puts stems on the fret numbers, as though they are note heads, to convey some of the timing information. This clutters the TAB and can be more difficult to distinguish rhythm than it’s Staff counter part.

While it is often easier and faster to read TAB if you have heard the song before or already have a sense of the rhythm and other dynamics, the more marks there are on the TAB portion, the more difficult it gets to read.

Another difficulty is that the numbers in TAB don’t give you the same visual sense of the melody that the notes in standard notation do. Your singer is going to be lost. Showing TAB with standard notation and chord diagrams is probably the most effective.

Join the discussion and let us know your thoughts.